Is your food safe, or has it been genetically modified (GMO Foods)?  Most of the corn, wheat, soy, etc., have been genetically modified. Pure foods are becoming more difficult to find.  Big Pharma is coming up with new names for new diseases and new drugs.  The latest money making marketing ploy is that of “gluten free” foods.  The newest disease is called, “Celiac Disease”.          …. and the beat goes on … new year … new disease.

Over 20 years ago, a chemical company known as Monsanto invented a genetically modified (gmo) seed and bought a patent for it. Monsanto sold this “seed” concept to our government, claiming, “We can help the farmers and third world countries grow more crops ! We will genetically modify the SEED by combining the Weed Killer (aka Roundup) with the seed. Although, we are changing the DNA of the seeds, this hybrid seed will not affect the DNA of people and therefore is safe for human consumption. ”

Now most of the corn and soy beans available to us for human consumption have been genetically modified. Many other plant seeds have also been modified. (Be on the alert for these.)

Videos that may be of interest to you:

GMO seeds:  The “Massive Con” Causing a Suicide Every 30 Minutes

Eating plants from your yard :

Last weekend, I went to Lowes, Home Depot and the Farmer’s Market to look for some Heirloom plants for my raised garden bed. Each year I plant tomatoes, bell peppers, herbs and Swish chard and enjoy the taste and energy I receive from knowing my food is safe and healthy.

This year I was shocked to see the potting soil (at Lowes) contains a weed killer in the bag ! This made me sad for the “uninformed” public.

Don’t buy this “tainted” potting soil … Don’t buy Roundup, Ortho, or any poison to spray on your plants! … or let the spray go any where near your flowering plants, (edible or not) ! This weed killer affects the DNA of the plant and if you ingest it, you will be affected, too. For flowering plants, the bees are affected … and we need the bees to pollinate our food.   ( My neighbor uses soapy water to kill weeds … a much safer substance. )

Another subject to be aware of are genetically modified (GMO) foods! I remain surprised at the number of people who have never heard of ”GMO” foods. Trust me, the general public has no idea of the dangerous foods they are consuming. Most of us trust the FDA and believe we are protected by our American Medical Association (AMA).  Sad … that we cannot afford to trust these groups to protect our food.

I am even more surprised at the number of people taking the drugs provided by Big Pharma, after hearing the side affects from the never ending TV commercials. This is so scary.  The USA has become a society dependent on drugs for survival.

Our government and the FDA (I used to trust they were protecting us) “bought” Monsanto’s concept … or did they know?   As the new generation of plants become sterile (cannot reproduce from their own seeds), humans who consume these plants will risk the possibility of compromised DNA resulting in unexplained deformities and illnesses.  Pure, organic, unadulterated, heirloom produce, plants and seeds are becoming more difficult to find.  Who will suffer the most? … the uneducated and poor … those who do not realize the importance of eating pure foods.

This new PATENT (purchased and invented by Monsanto) requires the farmers to use Monsanto’s (gmo) seed. If the (informed) farmers refuses to use the hybrid seeds (rather than the heirloom seeds), the farmers are either sued or forced out of business. Many farmers are ”misinformed” … they just believe, trust the FDA, buy and plant the seeds without questioning their purity or safety. Every time you and I buy seeds, plants or vegetables, we are blindly trusting, too. 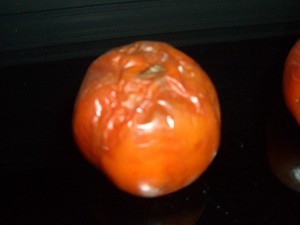 After 1 week, these 2 tomatoes became a “science” experiment. They never ripened, spoiled, cracked or disintegrated. After 3 months, they began to wither … so I thought I’d better throw them away before they split and seeped. When I picked them up, they were still in tact and firm. The picture to your right is that of a 3 month old tomato.   See for yourself. This is what a genetically modified food looks like after 3 months.

I also noticed for the past 2 years my plants were not producing as well as they had in the past. So last year, I began searching and purchasing Heirloom plants and seeds.

During this 3 months of the tomato experiment, I went to the farmer’s market, visited each booth that sold tomatoes and smelled of the tomatoes. None of the tomatoes smelled like I remember a tomato smelling when I was a child.

As a child, I remember the watermelons being bright red, sweet and full of juice and seeds.  Now most people seek the seedless watermelons which are light pink, non-juicy and contain only one seed.  Where is the “energy” in this food?  If you plant this one seed, do you think a plant would grow?  How could such an organism affect your body?

The farmers are innocent and trusting. Monsanto and the FDA are not innocent. If you have an opportunity to sign a petition and make a difference, I hope you will welcome the opportunity.

In my humble opinion, the best way to tell if a fruit is ripe and pure is to smell of it. (according to the Harris Teeter produce man).  Are you one of those people who presses their thumbs into a fruit to detect its ripeness?  (I have seen you a few times … and wonder if you even think about bruising this fruit for the next customer .)    Please refrain from pressing your thumb into the cantaloupe to see if it is ripe. Just smell the end of it where the stem was attached. If it smells sweet, it is ripe. If it smells green, let it sit on your counter for 3 days and it will ripen. Each thumb press causes a bruise and spoilage … and that is not very kind to your fellow consumer.

Plant your own Heirloom seeds! oh, and btw, Swish chard grows all year round and has high food value, just like spinach.   Go on an experimental adventure with foods … try new ones.  Sprout, ferment, sample organic foods along the parameter of your grocery store.  Avoid toxic foods that poison your blood.

Pure Food is Your Fuel :

If you want to “fuel” your body, build your immune system and protect yourself from disease, these are good rules to follow:

I wish you well … happy healing and eating for 2012 and always ! Share our news letters with friends and family

Wishing you health, knowledge and prosperity,