Do you want to be healthier and feel more alive?   Eat more of the powerhouse vegetables and fruit !

Eating more fresh vegetables is one of the simplest choices you can make to improve your health and ward off countless chronic diseases. Most any fresh vegetable is good for you… but some are considered to be the powerhouse vegetables and fruits!

Choose from the powerhouse vegetables and fruits that have the most nutritional density.   These are the foods most strongly associated with reduced chronic disease risk.

41 Powerhouse Vegetables Based on Nutrient Density

You may have heard the advice to eat dark green leafy vegetables or focus on including a rainbow of colors (green, purple, red, and orange) when choosing your produce. This is good advice, but a researcher from William Paterson University took it a step further by analyzing levels of 17 nutrients in food considered to be important for lowering your risk of heart disease and cancer.1 These include:

The study calculated how many of the above nutrients (per calorie of energy) were included in 47 fruits and vegetables (based on a 2,000-calorie-a-day diet).

The higher the value, the more nutrient dense the food was determined to be.  The following chart lists the 41 foods that satisfied “powerhouse” criterion, based on nutrient density.2

If you’re in a veggie rut, this list offers some great ideas to expand your diet while adding valuable nutrition to your meals.

This recommended list of vegetables provides a guide to the most nutritious vegetables, and those to limit due to their high carbohydrate content (think: starch is “hidden sugar”). You’ll notice many similarities to the powerhouse vegetable list above. Generally speaking, the greener the vegetable, the more nutritious it will be. I strongly advise you to avoid wilted vegetables of any kind, because when vegetables wilt, they lose much of their nutritional value.

And while I typically recommend choosing organic vegetables as much as possible to avoid pesticides (as well as boost nutrition), wilted organic vegetables may actually be less healthy than fresh conventionally farmed vegetables. Freshness is a key factor in vegetable quality, so if you can’t grow your own, look for those farmed locally or, better still, farmed locally and organically. So, as a general guide, the following list of vegetables details some of the best and worst vegetables for your health.

As mentioned, if you can find locally grown organic produce, this is your best bet from a nutritional perspective. It will be fresh (non-wilted), free from chemicals, and more nutritious. According to a study published in the journal PLOS ONE,3 growing tomatoes according to organic standards results in dramatically elevated nutrient content compared to tomatoes grown conventionally, using agricultural chemicals. The organic tomatoes were found to contain 55 percent more vitamin C and 139 percent more total phenolic content at the stage of commercial maturity compared to conventionally grown tomatoes.

You may have noticed that sometimes organic produce, such as tomatoes, are smaller than conventionally grown varieties, but don’t let this dissuade you. While many unaware consumers equate size with quality, this simply isn’t the case. According to research published in 2009, American produce, while larger than ever before, contains fewer nutrients and tastes worse than it did in your grandparents’ days. In fact, the average vegetable found in today’s supermarket is anywhere from 5 percent to 40 percent lower in minerals such as magnesium, iron, calcium, and zinc than those harvested just 50 years ago.

As the featured study suggests, jumbo-sized produce contains more “dry matter” than anything else, which dilutes mineral concentrations. Previous research has also shown there can be a nutritional difference between organic and conventionally grown vegetables. For example, a 2003 study in the Journal of Agricultural Food Chemistry found that organic foods are better for fighting cancer.4 A 2010 study conducted by PLOS ONE also found organic strawberries to be more nutrient-rich than non-organic strawberries.5

But perhaps one of the best studies out there on the benefits of organic versus conventionally grown foods is the 2007 Quality Low Input Food Project — a $25-million study into organic food, and one of the largest of its kind.6 The researchers grew fruit and vegetables, and raised cattle, on adjacent organic and non-organic sites, and discovered that:

The results were so impressive they stated that eating organic foods can even help to increase the nutrient intake of people who don’t eat the recommended five servings of fruits and vegetables a day. So if you’re trying to get more nutritional density out of your food, eating organic is wise choice.

Three More Ways to Boost the Nutrient Power of Your Vegetables

What else can you do to get even more nutrition out of the foods you eat? Plenty, actually. The way in which you prepare and grow your veggies makes a difference, with the following suggestions at the top of my list:

Fermenting is one of the best ways to turn ordinary vegetables into superfoods. The culturing process produces beneficial microbes that are extremely important for human health as they help balance your intestinal flora, thereby boosting overall immunity. Moreover, your gut is the primary locus of your immune system and also literally serves as your second brain, and even produces more of the neurotransmitter serotonin—known to have a beneficial influence on your mood—than your brain does. So, maintaining a healthy gut will benefit your mind as well as your body.

Fermented foods are also some of the best chelators and detox agents available, meaning they can help rid your body of a wide variety of toxins, including heavy metals. When fermenting vegetables, you can either use a starter culture or simply allow the natural enzymes, and good bacteria in and on the vegetables, to do all the work. This is called “wild fermentation.” Personally, I prefer a starter culture, as it provides a larger number of different species and the culture can be optimized with species that produce high levels of vitamin K2, which research is finding is likely every bit as important as vitamin D.

For over a year now, we’ve been making two to three gallons of fermented vegetables every week in our Chicago office for our staff to enjoy. We use a starter culture of the same probiotic strains that we sell as a supplement, which has been researched by our team to produce about 10 times the amount of vitamin K2 as any other starter culture.

When we had the vegetables tested, we found that in a four- to six-ounce serving there were literally 10 trillion beneficial bacteria, or about 100 times the amount of bacteria in a bottle of high-potency probiotics. There are about 100 trillion bacteria in your gut, so a single serving can literally “reseed” 10 percent of the bacterial population of the average person’s gut! To me, that’s extraordinary and a profoundly powerful reason to consider adding fermented vegetables as a staple in your diet.

Juicing provides an easier way for you to consume more vegetables.   Most health authorities recommend six to eight servings of vegetables and fruits per day.  Raw juice can be likened to a “living broth,” as it is teeming with micro-nutrients and good bacteria that many people are lacking.

When you drink fresh-made green juice, it is almost like receiving an intravenous infusion of vitamins, minerals, and enzymes.  The nutrition goes straight into your system without requiring the body to break them down.  Drinking your j 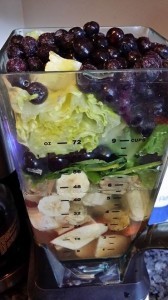 uice first thing in the morning can give you a natural energy boost without resorting to stimulants like coffee. Since the juice is already in an easily digestible form, it can help revitalize your energy levels within as little as 20 minutes.

Juicing also allows you to add a wider variety of vegetables in your diet. Many people eat the same vegetable salads or side dishes every day. This violates the principle of regular food rotation and increases your chance of developing an allergy to a certain food. Plus, it limits the number of different phytochemicals in your diet, as each vegetable will offer unique benefits. With juicing, you can juice a wide variety of vegetables that you may not normally enjoy eating whole.

Sprouts are a superfood that many people overlook, as they offer a concentrated source of nutrition that’s different from eating the vegetable in mature form. Sprouts in general have the following beneficial attributes:

Some of the most commonly sprouted beans, nuts, seeds and grains include:

My two favorites are sunflower and watercress sprouts. They provide some of the highest quality protein you can eat. They are also a perfect complement to fermented vegetables. It is hard to imagine a healthier combination that provides the essentials of nutrition very inexpensively. In addition to their nutritional profile, sprouts are also easy to grow on your own with very little space and time.

Are You Eating Your Veggies?

The research, published in the Journal of Epidemiology & Community Health, is among the first to quantify the health benefits of eating different amounts of fresh produce. As you might suspect, eating any amount of vegetables was better than none at all, but the benefits increased with more servings:

Most vegetables are not very calorie dense and as a result they probably should constitute the bulk of your diet by volume. Even though my diet is 70 percent fat by calories, if you were to spread out all the food I eat in a day, the largest volume of food would be vegetables. Vegetables contain an array of antioxidants and other disease-fighting compounds that are very difficult to get anywhere else. Plant chemicals called phytochemicals can reduce inflammation and eliminate carcinogens, while others regulate the rate at which your cells reproduce, get rid of old cells, and maintain DNA. Studies have repeatedly shown that people with higher vegetable intake have:

Vegetables have an impressive way of offering widespread benefits to your health. When you eat them, you’re getting dozens, maybe even hundreds or thousands, of super-nutrients that support optimal, body-wide health. We’ve compiled an extensive review of the health benefits of vegetables in our Mercola Food Facts Library. If you want to know more, that’s an excellent place to start, but suffice to say mama was right: if you want to be healthy and strong, you’ve got to eat your vegetables !

To read the article in its entirety, go to: